Nottingham City Council building with the Hack24 banners showing. Taken by me

The folks over at the Hack24 website do a much better job of describing what it is than I usually do. They describe it as:

Teams of up to four people compete for some awesome prizes by starting with innovative ideas and building them into new things.

Clever things, useful things, funny, arty or philanthropic, whatever you build, you’ve got just 24 hours to make it a prize winner!

Whereas I always tell people:

It’s a 24 programming competition in Notthingham

See? I told you that their description was better.

Haven’t You Done This Before?

Indeed I have. Last year, in fact.

you can read my (after the fact) blog post about it, here

This year will be slightly different, though. Last year, we spent the entire 24 hours working feverishly on our code. This year, we’ll be taking things a lot less seriously.

Sure, programming is still serious business. But we didn’t really stop to take in some of the other events that were happening around us. This year, there are breakout rooms, Playstations and all sorts.

Plus, anyone who has listened to the two most recent episodes of the Cynical Developer

will know that it’s not just about programming for 24 hours:

if you’re going to be taking part in hack24, I’d recommend giving those two episodes a listen

scroll back up, there’s a link to it somewhere

we built the basics of an enterprise level app in 24 hours. This was a huge achievement, but it came at the cost of a little stress and a lot of under-the-breath-swearing

mostly on my part, I have to say

This year, I’ll be taking part in the community aspect of it all, seeing what others are doing, and maybe playing a little Playstation while I’m here.

Anyway, on with the live blog part.

The way that I’m going to do this is by updating this blog post as the day goes on. The updates might be sporadic, or they might be minute-by-minute

I doubt that they’ll be that often – I wouldn’t get anything done, if they were

Anyway, on with the show!

I’ve just recorded a short video on my pre-Hack24 setup. Here’s an embed of the video:

I was too close to the mic when I recorded it, so turn your speakers/headphones down before you start

I’ve done my final equipment check and I’m pretty much ready to head off. I’m staying about 10 minutes away from the event, so I’ll be setting off in the next half an hour or so

ourdoors open at 9am

I’m also planning to live stream part of the event, as I mentioned in my video from last night. This will have to be dependant on the wifi, and I’ll probably try it during a quiet period

last time, it was super quiet around midnight

are here. Already the table we’re sitting at looks like a disaster zone of technology and coffee.

James from the Cynical Developer just took and tweeted a fantastic picture of the three quarters of the team. 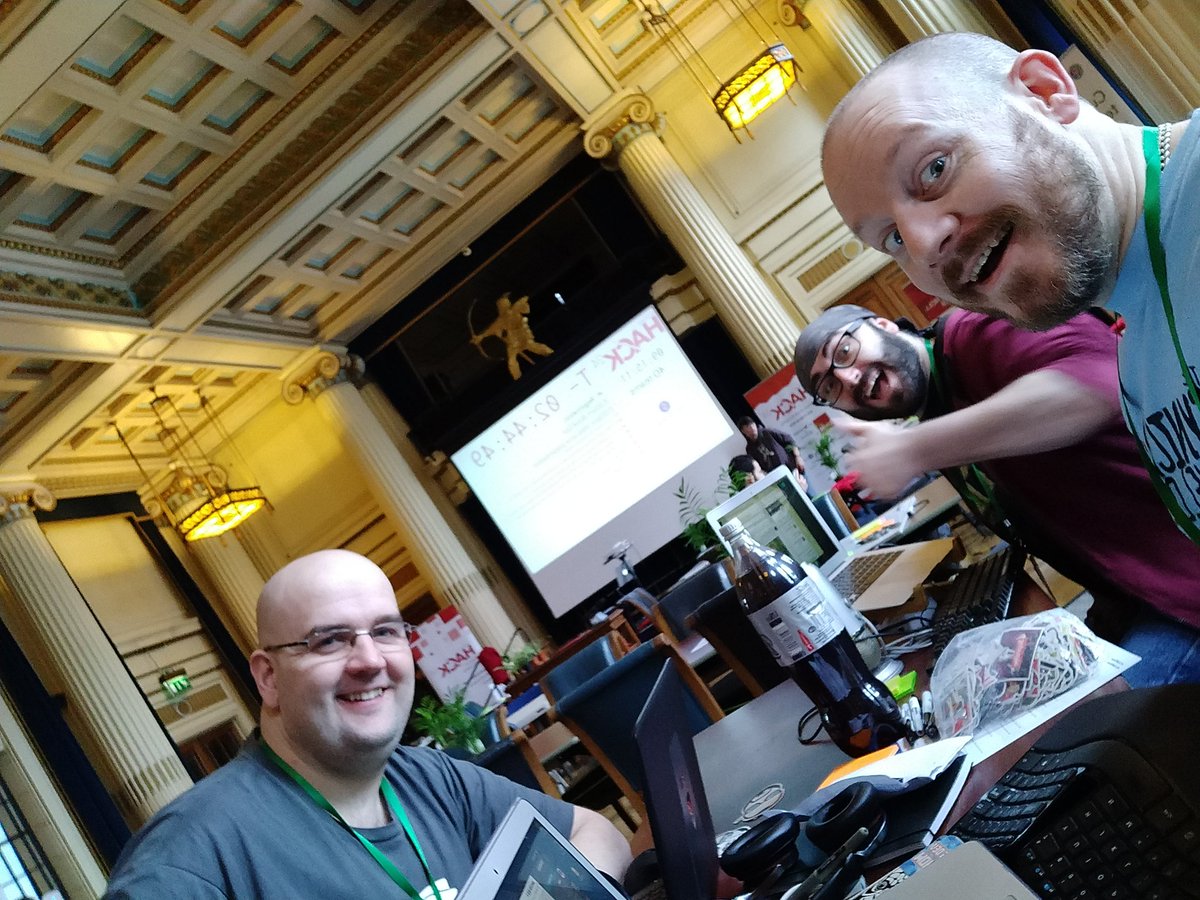 And we’re here! Time to get setup and ready to go! https://pbs.twimg.com/media/DX6pM4iWkAAL4vt.jpg

The design for Hackbot this year is super cute. It makes me think of a cross between Baymax and the DotNetBot:

With just over an hour and twenty minutes until the welcome presentation, I’ve started to step up my photo game.

The welcome presentation has started. As soon as that’s finished, we’ll be off.

I’ll share details of the hack I’ll be putting together as soon as the presentation has finished.

I’d already decided, last night, which challenge that I’m going to work against: The Experian Learning About Money Challenge, which they describe as:

For example, could you:

We’re really excited to sponsor Hack24 and can’t wait to see what creative hacks participants will come up with to help people improve their understanding of a complex financial landscape.

As such, I’ve been think of how to help folks with their finances. It was this prompt which sparked the idea:

I’ve taken that, twisted it slightly and am running with it. Check back later and I’ll talk through my idea.

Lunch is now over. It was tapas, which was cool. Also the Hack24 live stream is now working, so if you want a glimpse of what it’s like here, then take a look at the following embedded video:

We’ve just gotten back from our first walking break. It’s a good idea to get up and stretch your legs every so often

so we decided to take a bit of a walk and get some air.

While we were out, Paul filmed a little discussion with each of us:

We’ve just had a quick discussion of our hacks – up until this point, we’ve been working on our own hacks – as to which ones we should focus on going forward.

So far, I’d been working on an app to help teach budgeting when shopping. The idea for the app was that you could run it while walking around a shop, adding items as you browsed along with your budget. The app would then suggest the best possible collection of items for your budget, giving you the full cost and an idea of the remaining budget (if there was one).

I got as far as creating a WebApi which took a list of items and their cost, and would return the best possible combination

It did this by working out all of the possible permutations (combinations) of the items and their costs. It would then discard any which were over budget, and return those which were closest to the target budget

but not an app which would talk to it.

For those who want to see it in action, here’s a screen shot of the openAPI end point:

This was one of the apps which has been canned – we’ve dropped from four apps to two in the hopes of focussing our collective energies.

By this point last year, a lot of folks had gone home or found somewhere to get their head down. I’m not going to lie, not heeding to the call of Morpheus is quite difficult, but I’m going to make it until 5am at the very least.

The others in Merge Conflicts have disappeared somewhere, and I’m sitting here listening to Bio Hazard Orchestra

while I type this up. I seem to have hit a snag with the git installation on my computer which is preventing me from checking anything in, so I’m being super careful when making changes to the code that I’m working on.

scroll back up to 8pm for a few details on that

in a later blog post, or as part of an app that I work on in my own time – after the hackathon.

As a side note: I keep hitting the end key on my keyboard in the hopes that it takes the caret to the end of the line it’s currently on.

I mean, it makes sense. But not when both Windows and the majority of Linux distributions handle it the way I’d have expected MacOS to do. Maybe I’m just a little too sleepy

Almost as if trying to prove just how quiet it’s become, Paul snapped this photo from the GitHub lounge: 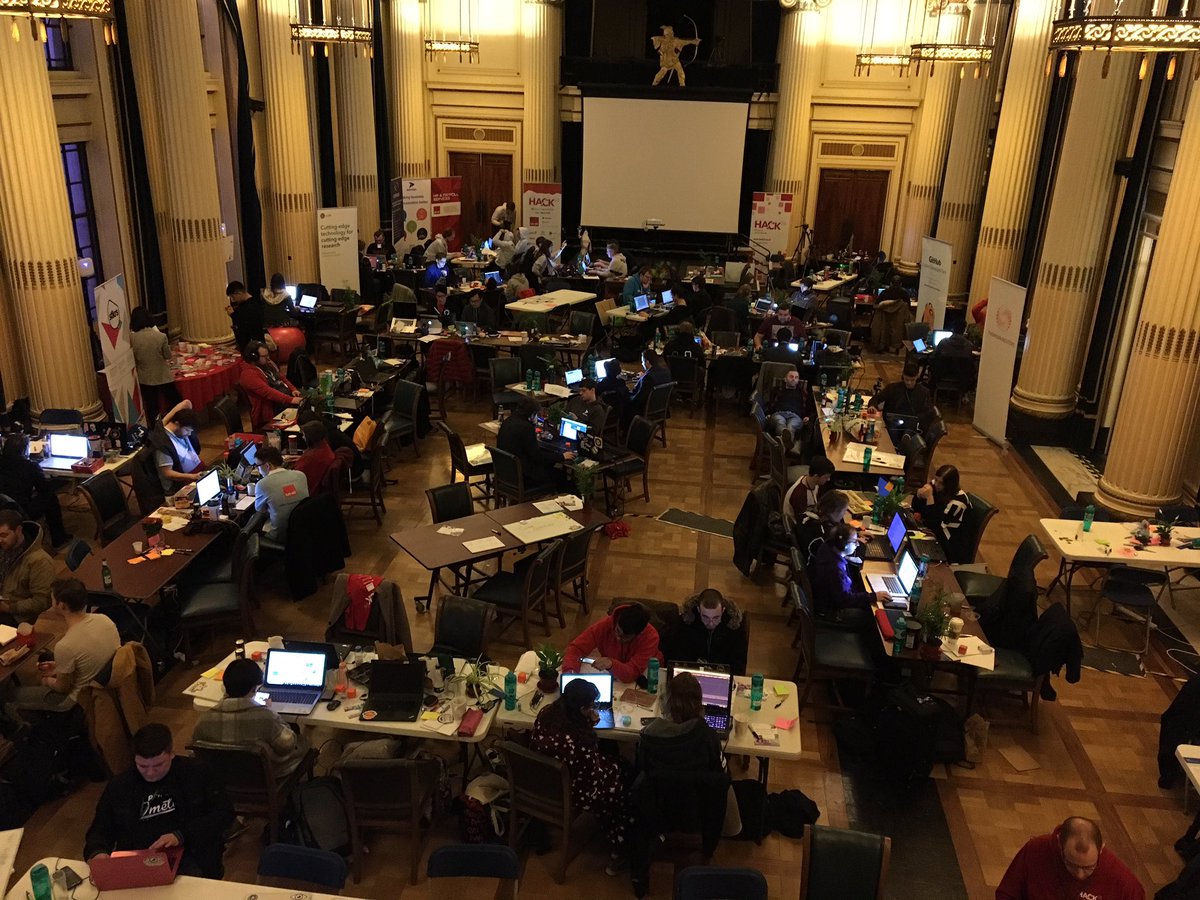 So empty was it, in fact, that I’m not even on the picture. I’m guessing that I’d taken a coffee break at the time.

I just made another ramble-tastic

video from the main room of the hackathon.

You’ll have to wait until later to find out all of the juicy details, but I’ve just done some acting. 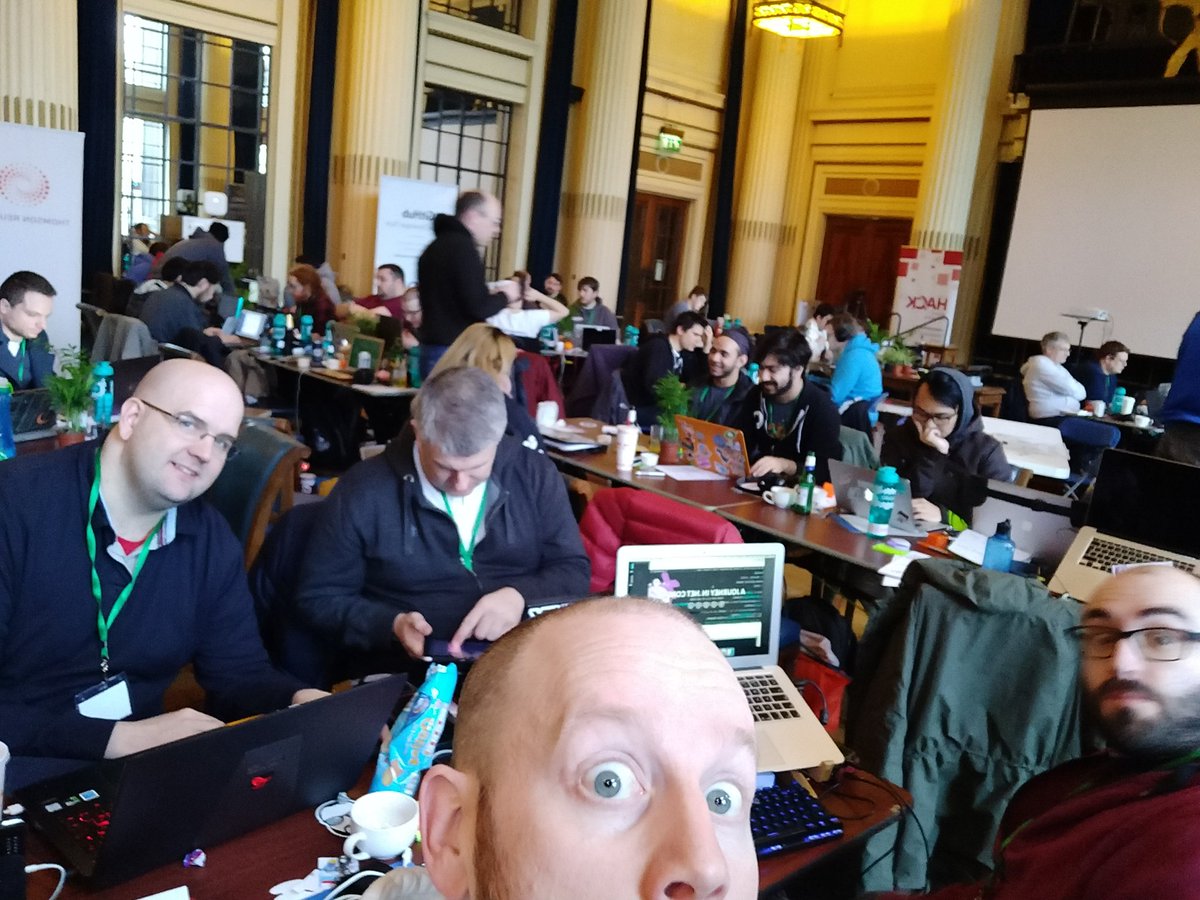 With just three hours until all development on hacks has to come to a stop, there’s definitely a quiet hush in the room.

At midday, all development must stop. The teams then have two hours to produce, upload (to YouTube) and share a video of their hacks or apps. Once all of the videos have been submitted, they will need to be judged and the winners picked.

After that, there’s a wrap up presentation.

After that there’s the award ceremony.

Looking around the room, it seems like a lot of the teams are still developing their hacks whereas (for the most part) we’ve finished ours and principle photography has begun

With one hour remaining, Hackbot decided to have a chat with everyone about how long 24 hours is in seconds.

I’m sitting on the train home. The past 2 days have been a complete blur. I’m sure that I can speak for the whole of Merge Conflicts when I say that we had a lot of fun.

Oh, and we won two of the challenges. James and I both have to travel back with all of the stuff we each came with

and all of our prizes.

You might be wondering what the prizes were. Well, you’ll have to wait a little longer (at least until I get home) before I snap a photo or two of them. But right now you should feast your eyes on our award winning video – “You Need Aid”:

In case you’re at all interested, here’s the other video we submitted – “Who Me Pays”:

I did have lines, but they somehow got dropped when the video rendered

I never used Who Me Pays, and now I live on the street.

It was a tongue in cheek reference to our other video.

This is the final update, I promise.

I just wanted to share with you a photo that I took of the prizes that we won: 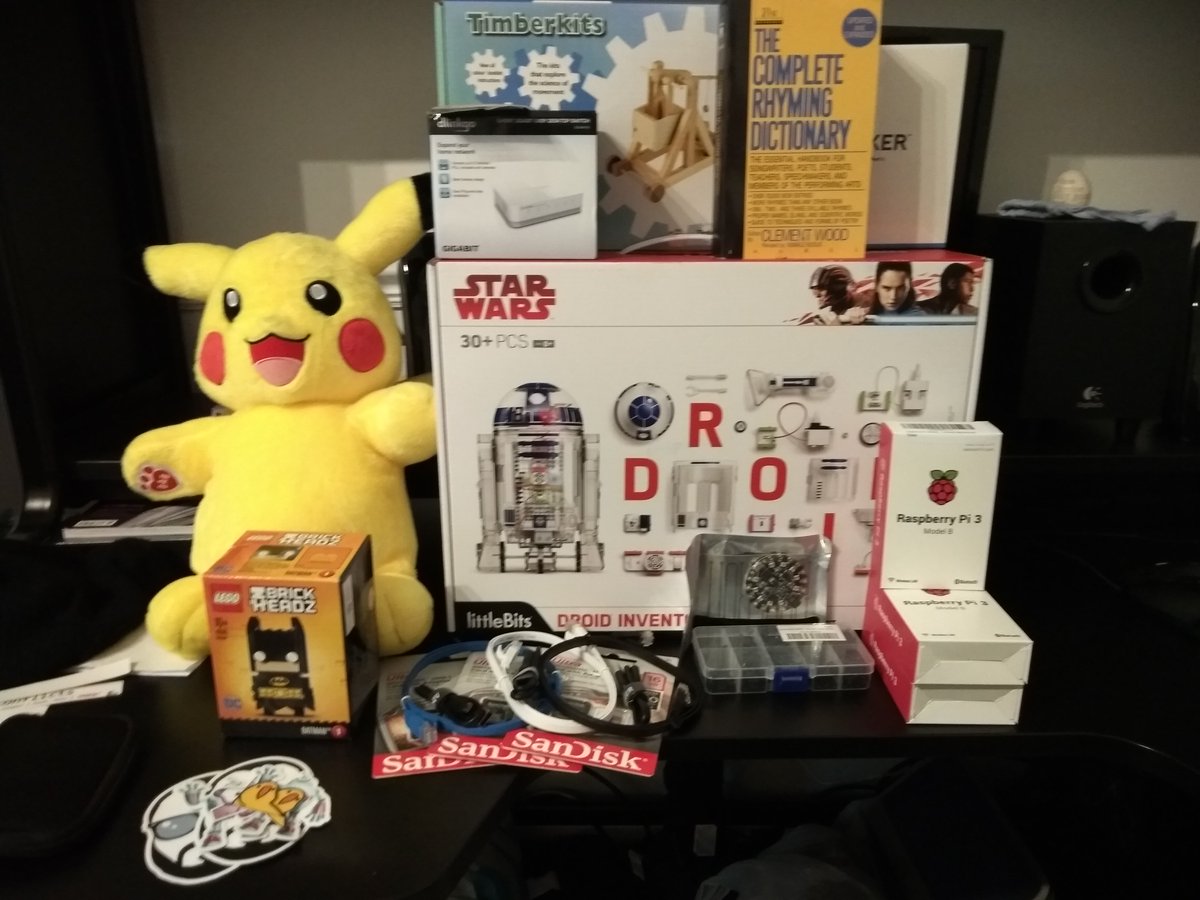 Thanks to @HackTwentyFour for the amazing experience this weekend, and thanks to @esendex and @MyUNiDAYS for the prizes.
There are so many that they’ve taken over my desk.
I guess I should get a bigger desk ?https://pbs.twimg.com/media/DYF0QxfXUAAS6Om.jpg

There’s a small pile of stickers, including some Cynical Developer ones.

Buying me a coffee
Hack24Live blog